We have had welcomed huge crowds to our Friary Church on Church St since the Dublin Camino began on June 2nd. Again, the idea of the Camino was to invite pilgrims to the Eucharistic Congress to visit the seven oldest churches in Dublin; St. Annes, Dawson St; Our Lady of Mount Carmel, Whitefriar St, St. John and Augustine, John's Lane, St. James, James's St, St. Mary of the Angels, Church St, St. Michan's, Halston St, and St. Mary's Pro Cathedral. We expected a fair turnout over the two weeks but the pilgrims that came were well beyond expectations. There has been an amazing response to the Dublin Seven Church Camino with waves and waves of pilgrims from all over the country and all over the world coming in all weathers. And all with a smile on their face. Good humour, banter and enthusiasm was met with our helpful Pilgrim Ambassadors at the doors of all churches.

Pilgrims came from all over and the visitors book is a testimony to these 'United Nations' of visitors. Kildare; Killester; Dun Laoghaire; Baldoyle; Skerries; Malahide; Meath St; Blanchardstown; Finglas; Iona Road; Cork; Toronto; Vancouver; Pensacola, Florida; Glasgow Scotland; The French speaking pilgrims from Montreal; Korea; San Antonio, Texas; Italians, and Chinese Canadians; And these were some of the groups I met. Other Friars and Ambassadors met so many more. The interesting news is; more who were at the RDS and who couldn't make the pilgrimage still wish to do so, so there may be plans to extend it going forward. Watch this space.

There were major liturgies in the RDS and a final 'Statio Orbis' Mass in GAA H.Q. Croke Park, and there were other more local liturgies. We were involved with the Legion of Mary as they welcomed many Legionaries from all over the world. We welcomed different groups to Church St and Halston St and spoke to them (In French, Gaeilge, and Korean) about the history of the Churces.

We had two big Masses during the week of the Congress. We welcomed the Korean Delegation along with two of their Bishops for a Mass on Wednesday, 13th of June and we had the main IEC Mass for the Legion of Mary on Friday, 15th of June in which Bishop Eamonn Walsh, Auxiliary Bishop of Dublin was the main celebrant along with a full church and 30 concelebrants. The Legion's Concilium Headquarters are in the Capuchin Parish bounds on Morning Star Ave. It's founder, Ven. Frank Duff was a regular visitor to our friary in Church St. 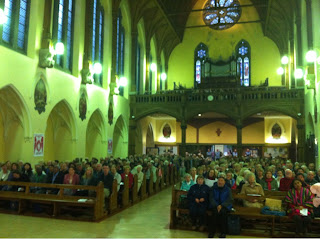 So, we are almost at the end of this historic Internatonal Eucharistic Congress in Dublin 2012. We look forwaed to the final 'Statio Orbis' Mass and the broadcast of the Holy Father, Pope Benedict XVI. The whole occasion has been a reminder of the fact that the church is not only a church in Ireland, but a church worldwide and the work and ministry of all who are baptized is primarily about proclaiming the Kingdom of God in our time. 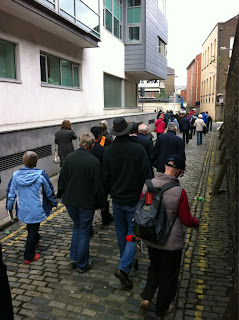 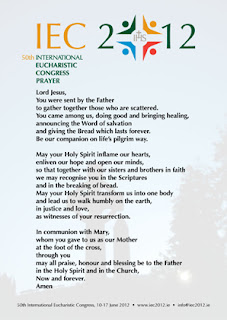