The Spirituality of St. Patrick's Lorica, 'The Cry of the Deer' 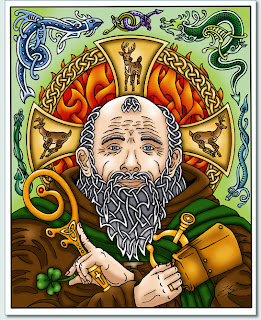 Storytelling and mythology flourished during the Golden Age of the Irish (Celtic) Church but it wasn’t until the arrival of the Vikings in the 9th Century that scholars began to transcribe these stories into books to save them from being lost.  It is in one of these wonderful books, the Book of Armagh, that we encounter the Lorica of St. Patrick (known also by its Irish title Cry of the Deer (Faed Fiada).

In this Lorica we see a strongly incarnational spirituality.  In it we experience God as flowing in and through, what can be described as, a family.  At the center of this family is the divine presence and power of God; the three-in-one.  This divine presence and power flows in and through the strength of Christ, through his Church and its sacramentality; from the Cherubim and angels to the great Holy men and women of the early Christian community, and right down to the natural elements themselves.  We see in this Lorica a spirituality in which God is experienced everywhere, everyday in and through any and all of these varied embodiments; a spirituality in which the kinship felt with the angels and saints is completed by the kinship with one another; a spirituality in which there is a closeness and immanence between the natural and supernatural worlds.  This Lorica tells the tale of a wonderfully life affirming and exuberant kind of spirituality which clearly owes something of its spirit to the pre-Christian religious thought of the Celts, and those even before them.

Yet, the Lorica depicts a spirituality of an age which was soon to be over as Church reforms were imposed from Rome and the island was further invaded by the Anglo-Normans in the 12th century.  As we celebrate the presence of St. Patrick in Ireland let us spare a thought for the early Christian Church that he gave birth to.  Let us not forget the model of those early Christian communities which flourished in the centuries following St. Patrick.  And today, as we experience great upheaval and renewal in the Church in Ireland, let us pray that we will witness the dawn of a renewed vision and approach to both the spiritual and the material world; a dawn which will bring to light, once again, the essence of something less authoritarian, more spiritual, more holistic, more ecologically sensitive, and more inclusive and egalitarian; a dawn which will resurrect the Spirituality of St. Patrick’s Lorica.

NB. The first full text of this Lorica comes from the Liber Hymnorum manuscript of the 11th century.

I arise today
Through a mighty strength, the invocation of the Trinity,
Through the belief in the threeness,
Through confession of the oneness
Of the Creator of Creation.

I arise today
Through the strength of the love of Cherubim,
In obedience of angels,
In the service of archangels,
In hope of resurrection to meet with reward,
In prayers of patriarchs,
In predictions of prophets,
In preaching of apostles,
In faith of confessors,
In innocence of holy virgins,
In deeds of righteous men.

I arise today
Through the strength of heaven:
Light of sun,
Radiance of moon,
Splendor of fire,
Speed of lightning,
Swiftness of wind,
Depth of sea,
Stability of earth,
Firmness of rock.

I summon today all these powers between me and those evils,
Against every cruel merciless power that may oppose my body and soul,
Against incantations of false prophets,
Against black laws of pagandom
Against false laws of heretics,
Against craft of idolatry,
Against spells of witches and smiths and wizards,
Against every knowledge that corrupts man's body and soul.

Christ to shield me today
Against poison, against burning,
Against drowning, against wounding,
So that there may come to me abundance of reward.

I arise today
Through a mighty strength, the invocation of the Trinity,
Through belief in the threeness,
Through confession of the oneness,
Of the Creator of Creation.

And, as it St. Patrick's Day, why not enjoy an Irish Dance performed by the Novices!