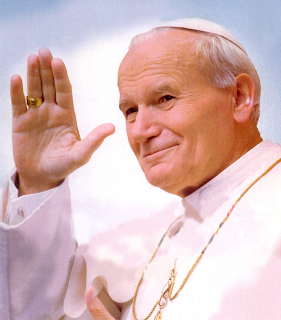 Dearest [Capuchin Brothers], have the true and prophetic impetus to help the people of our time who with regards to the moral values quite often grope in the dark.
Animate the youth, promote biblical groups and prayer communities. Bring Christ to the world, especially through the custom of popular contact which countersigns you. Be missionaries!
The need to bring the Gospel to those who do not know about it is becoming more pressing because the masses of people who have not yet met the Lord Jesus is growing.(...)
The pastoral needs of the environment where we have been brought up do not constitute a sufficient reason not to leave one’s own country and go where God will show us. (...) According to the teaching and the example of Saint Francis you have a rich inheritance to guard: it will make you well prepared for the new
evangelisation (Rome 1.7.1994)
Br John Corriveau, our former Minister General wrote of John Paul :
'John Paul II continuously showed us the proper way how to live the charism which Francis had accepted, lived and transmitted to his followers so that it would continue to live. And that magisterial way is the poor love lived in and from the fraternity because the “way of living in fraternity” allows the Kingdom of God to be visible and to grow among the men and women of all times. In his untiring effort to propose to us the figures of saints and blesseds who had grown up and lived the Franciscan-Capuchin charism, John Paul II has done nothing else but to tell us that it is
possible to live it even today, in this modern and technological era'.


We remember the words of John Paul:


open wide the doors of your heart to Christ ....


there you will find true life'
Posted by Capuchin Franciscan Vocations Ireland at 11:56