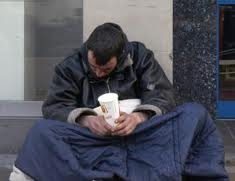 Today, October 10th is designated as world homeless day. The last Irish census showed us that over 3,000 people were sleeping rough or in hostel accommodation on the 10th of April 2011. The survey gives us a snapshot of the homeless situation in the country stating that:


But statistics, though helpful, only tell one side of the story. They cannot account for the human impact of homelessness on individuals, families and society as a whole. In the Capuchin Day Centre for Homeless People in Dublin, we encounter the human side of this tragic tale everyday. Over 700 meals are provided each day to people who have nothing and nowhere.

St Francis took the radical step of embracing the Lepers who lived near Assisi. He re-orientated his life to facilitate them regaining their dignity as human beings. In many ways, sadly, our homeless can be considered the lepers of today. The call of a day like this is a call to awareness, it is a call to embrace the message of Justice and Peace that our Baptism calls us to, it calls us not to simply walk by, but to stop and embrace, in whatever way we can, those who cannot pay us back....to give and expect not return. It may just be a smile, a 'hello' or a few moments of your time. Each small act is a huge step towards restoring human dignity.