Here is the text of a nice blog post on our new Pope and his stance on Justice and Peace from http://camdenlifejustice.wordpress.com. This is a great occasion for the Church, a new Springtime and we pray that St Francis will guide and support this holy and humble man with his intercession.

Tonight we here the call of Christ to St Francis of Assisi once more 'Francis, go repair my Church'.
I feel this humble man from South America's response is that of Samuel 'Here, I am Lord, I come to do your will'

Habemus Papam! And this new Pope we have is one who hails from the developing world, took public transportation to work, decided to live in a small apartment in Buenos Aires instead of the Archdiocesan palace, and cooked his own meals. A Pope who, when he was made a Cardinal, asked people from Argentina not to fly to Rome for the ceremony, but to instead donate the money to organizations working with those in material need. 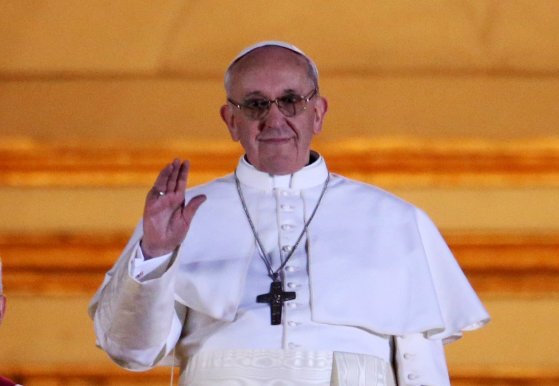 Habemus Papam!
He has stood with the poor and marginalized throughout his ministry. John Allen reports, for instance, that he visited an HIV/AIDS hospice in 2001 and washed and kissed the feet of 12 AIDS patients.
Some quotes:

“We live in the most unequal part of the world, which has grown the most yet reduced misery the least,” Bergoglio said during a gathering of Latin American bishops in 2007. “The unjust distribution of goods persists, creating a situation of social sin that cries out to Heaven and limits the possibilities of a fuller life for so many of our brothers.”

The bishop’s fidelity to the Gospel and his love for the spirit of poverty lead him to a special option in favour of the poor who are at the central core of the Good News of Jesus. The bishop walks with them.
In this area of missionary activity the Synod fathers pointed out the bishop as a prophet of justice. Nowadays the war of the powerful against the weak has created an abyss between the rich and the poor. The poor are legion. Before an unjust economic system with strong structural inequalities, the situation of the marginalized is worse. Today substantial groups of people suffer hunger. The poor, the young and the refugees are victims of this “new order”. Women in many places are looked down upon and are the object of a new hedonist culture. The Bishop must never tire of preaching the social doctrine which comes from the Gospel and which the Church has made explicit since the times of the early Fathers.

Finally, for now, the warmth and apparent humility Pope Francis I displayed when he was introduced was moving and powerful — highlighted for me when he asked the gathered thousands to pray quietly for him before he blessed them. I’m excited for the journey ahead for all of us, church! Viva il Papa!
Posted by Unknown at 21:04