Feast of St. Brigid of Kildare 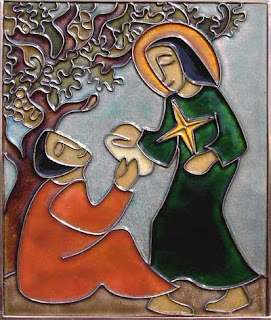 St. Brigid lived at the beginning of the Golden Age of the Celtic Irish CatholicChurch.  This period, from the late fifth century AD, saw monasteries become social, spiritual and political centers.  They were often huge theocratic villages,associated with a clan, along with their slaves, freemen, celibate monks,married clergy, professed lay people, men and women, all living side by sideand serving in various roles.

In thesetimes the monastic abbots were not necessarily ordained and, as is the casewith St. Brigid, were women too.  TheseCeltic Christians took their spiritual life very seriously and sought toachieve a personal and organic union between themselves and God (a theosis);with God dwelling in them and they in Him. They saw the true Christian life as being lived in and with Christ.  During these times the monasteries wereuniversally esteemed and regarded as the utmost expression of the Christianlife.
Today, as we seek a renewed vision and approach to boththe spiritual and the material world, we pray that we may recapture something ofthe essence of the deeply spiritual, holistic, ecologically sensitive, inclusiveand egalitarian Church which St. Brigid knew and led.  Following her example, may we grow each dayinto greater wholeness of mind, body and spirit!
Posted by Anonymous at 10:18