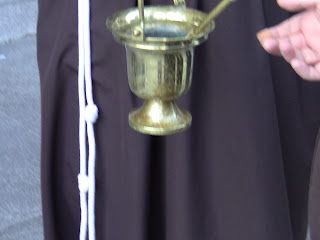 Yesterday, Br's Bryan and Sean began a week long mission for Skerries Parish. The first job to be done was to bless the local pets and their owners. There was a great turn out and everybody, including the pets, were well behaved.

Later in the evening we attending a performance of 'Peters Passion: A Musical Love Story' which is a fantastic take on the traditional passion play. Excellent performances, from the Transition Year student of Skerries Community College, of a brilliant script and musical score by Ms Bernadette Egan.

We finished our day by attending the last night of a tridium of prayer for the two fishermen who lost their lives and their families. It was a candle lit rosary at the harbour which ended with a lone piper playing 'Amazing Grace'. A very, very powerful witness of solidarity.