Today we will see and hear a lot about the 911 attacks on New York. Post 911, the news reports spoke of the thousands of heroes (I use this term to refer to both male and female) who went beyond themselves to help others. Those who, literally in many cases, laid down their lives for others. This is the Gospel in action. One iconic image is of five firemen carrying the limp body of Fr Mychal Judge OFM from the wreckage of the first tower. He was victim no 00001 and proclaimed a hero for his actions. 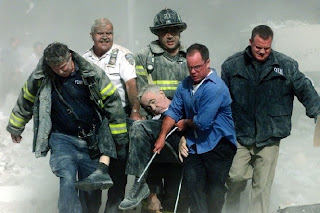 However, his life of heroism began long before that day and what he did on that day was a manifestation of the life of service to God and others that he had lived. Probably the greatest act of heroism that Mychal Judge ever did was to listen and respond to God's call to him to 'come follow' as a Franciscan Friar. That act of faith and how he lived that act, on a daily basis, meant that when it came to September 11th 2001, he was able to hear the words of Christ deep inside of himself 'Do not be afraid'.

We are all called to heroism in one way or another. We may not all get the opportunity to do, what we might consider to be, great or earth shattering things. However, heroism comes in many forms and often the small, and many times, unnoticed acts of faith, of hope and of love can, and do, have the most profound effect.

The world needs heroes and I am going to say that I believe that those who listen to, discern and respond to God's call in their lives are true heroes. This call can lead us in many ways...to marriage, to a particular vocational career, to religious life. Above all this, the call to be a hero leads us to become the best person we can be...the person God created us to be.

For those thinking about religious life or those who may have thought about it in the past but maybe have dismissed it...I would ask you to listen again, carefully. God dwells in the silence of our hearts and this silence is a mirror which we hold up to ourselves. A mirror in which we can see our true selves...as God sees us....as loved, as cherished, as valuable, as worthwhile and as needed to make a difference in this world....as a hero.

We remember today all who have lost their lives due to violence. All who have given their lives in the service of others. All the heroes in our own life experience and all those heroes out there who just haven't realised, yet, what they are.